The season hasn't started well for the Pirates. They're 3-6, ahead of only Milwaukee in the National League Central, 2.5 games behind the Cardinals and Cubs and 2 games behind the Reds. Among the problems:


Still, it isn't time to panic, at least not yet. It's true that the Pirates have suffered two shutouts in a row, which didn't happen at all last year, but it happened twice in 2013, when they won 94 games, the team's most since 1992. As for the won-lost record, last year's club, which made the postseason, was in fourth place in the division as late as July 18. The first nine days do not a season make.

One of the links on the Reading tab is to Joe Sheehan's newsletter. He sends it out via email, and I always look forward to receiving it. The little asterisk next to his name means that you have to pay for it. It's well worth the $29.95 annual fee, because of gems like this, from Tuesday:

So, madding crowds be damned, I'll be the guy who points out that the stats generated in one week of baseball are just as meaningless in April as they are in June as they are in August. Attempts to glean meaning from the performances of individuals or teams over six or seven or eight games are wasteful exercises in clickbait and confirmation bias. This is the worst part of baseball fandom in the modern age, the footballification of analysis, the insistence on stamping feet and insisting that, yes, this time is different.

Joe's point--and he's one of the best analysts out there--is that a short streak doesn't mean anything. Andrew McCutchen is hitting .207 after eight games. That stinks! But he batted .206 over a ten-game streak in 2014. That streak--from May 22 to May 31--didn't occur at the start of the season so it didn't cause the hand-wringing this year's start has. McCutchen will do better. So will the Bucs.

I'm not saying everything's great. It isn't. But it's way, way early to get worried.

(Except Melancon's pitch velocity. I'm really concerned about that.) 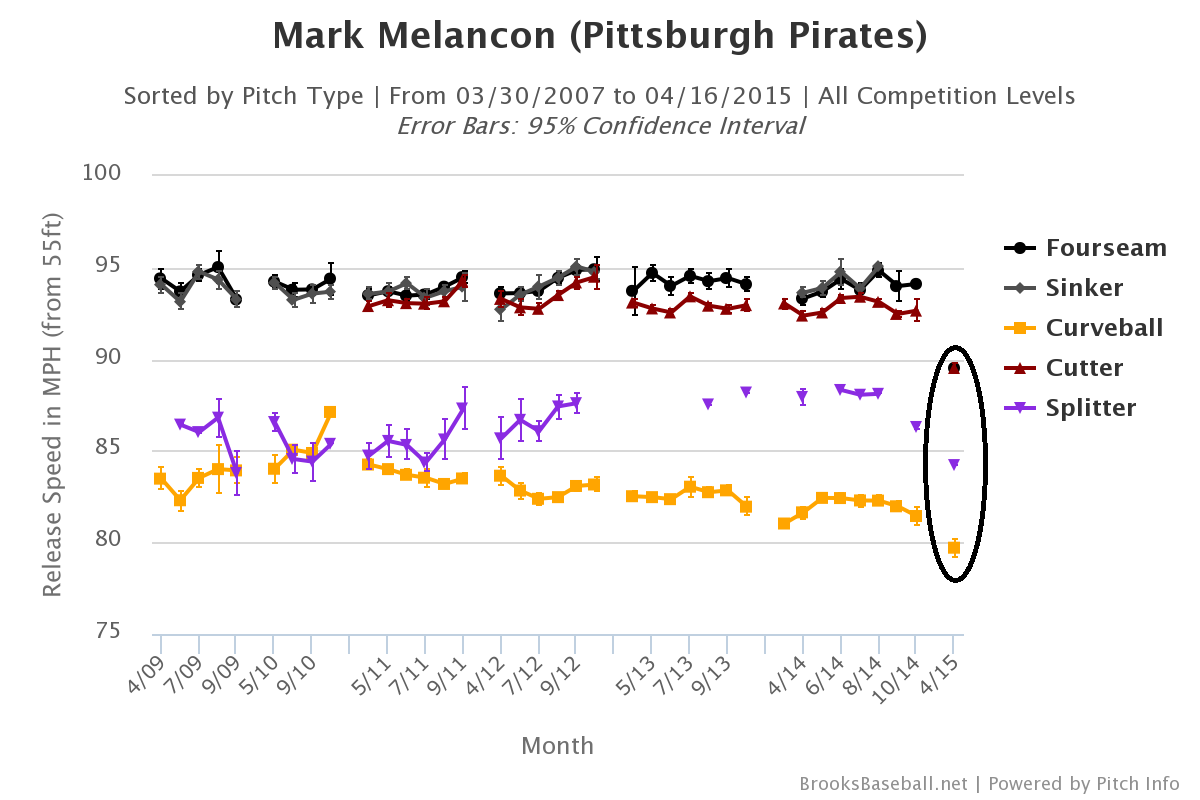 Next Up: Milwaukee Brewers

The Pirates host the Brew Crew for three games over the weekend. Last weekend, the Bucs took two of three in Milwaukee. The Brewers haven't been has bad as the Pirates at the plate; Milwaukee's hitters were 24% below league average entering play today, while the Pirates were 33% worse. But Pittsburgh's put together a 3.26 team ERA, sixth in the league, while the Brewers' team ERA of 4.38 is second-worst in the majors. So Pittsburgh's disappointing hitters meet Milwaukee's disappointing pitchers: Somebody should get better, right?