As noted here, this is primarily a Pittsburgh Pirates blog. However, I'll handle general baseball topics from time to time, including an occasional lookback to prior posts.

Back in January, I advocated the Baltimore Orioles trading for Carlos Quentin, then a spare part in the San Diego Padres' outfield. The Orioles had lost designated hitter Nelson Cruz to the Seattle Mariners via free agency. Quentin was a bust with the Padres, partly because of lost time to injuries, but from 2008 to 2011 he averaged 120 games per season as on outfielder/designated hitter for the Chicago White Sox. With the Orioles, I envisioned him as primarily a DH, since his work in the outfield (1) contributed to his injury-related absences and (2) stunk. He'd fill a roster hole for the Orioles, and I pointed out that


Quentin is good at getting on base. Among the 168 players with 2,500 or more plate appearances between 2008 and 2014, he ranks 47th with a .352 on base percentage. The Orioles led the majors in home runs last year, easily, with 211, and were second in the AL in slugging percentage with .422, but only sixth in runs scored, with 705. The reason is that their .311 on base percentage was fifth worst in the league. They didn't get enough guys on base to take advantage of the long balls. The current Orioles roster has only three hitters with 30+ games played last year with a 2014 on base percentage better than the league average of .316. Quentin would address the team's key offensive weakness.

Since then, two things have happened:


So I thought: No-brainer! The Orioles don't really have a DH, the guys they've used have been lousy, and cheapskate owner Peter Angelos can get Quentin for the major league minimum! Let's do this!

Then I read an article by Matthew Trueblood of Baseball Prospectus, entitled, appropriately enough, "Carlos Quentin's DFA is This Godforsaken Era in a Nutshell." Matthew posits that

Carlos Quentin is the victim of the modern MLB roster, and he helps explain the offensive famine that has so starved us all for runs over the past five years

Why is that? Matthew explains: 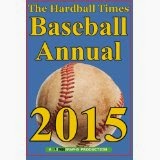 Basically, the roster spot that a hitter like Quentin would fill is now being occupied by a team's 13th pitcher. Why did the Tampa Bay Rays give 111 plate appearances at DH--17% of the team's total--to utility infielder/outfielders Sean Rodriguez and Logan Forsythe last year, who combined for just three home runs? Because they didn't have room on the roster for a bat-only guy. Eight-man bullpens squeeze the hitting side of the roster, exacerbating the lack of scoring today. Some 22-year-old who can hit 98 on the radar gun is a team's sixth inning specialist, while Carlos Quentin and his .484 career slugging percentage (28th among 127 active players with 3,000 or more plate appearances) sits at home, texting his agent every other day asking whether anybody called.

In this year's Hardball Times Annual, longtime baseball analyst Craig Wright proposes gradually capping the number of pitchers on major league rosters at 9 or 10. This, he believes, would have many benefits: Fewer pitching changes (so shorter games), pitchers pacing themselves more (so fewer strikeouts and, possibly, fewer arm injuries), more hitters and fewer tough pitcher/hitter matchups (so more scoring). Add to that list: The liberation of Carlos Quentin.