I was listening to SiriusXM's MLB Network Radio the other day. (I almost always hear these things in my car, where I can't take notes, so we're relying on my memory here.) The hosts were discussing how to speed up the pace of play at the major league level. One of the comments was something to the effect of, "One of the key problems is all the walks."


I'm not going to belabor this. Just note that:

My latest FanGraphs post is here. I talk about the National League West, which I view as the most idiosyncratic division in baseball, due to three factors:


Some of my FanGraphs posts get pretty numbers-heavy. This one isn't.
Posted by Rob Mains at 8:27 AM No comments:

It seems like a generation ago, but the Twins were sort of a model franchise in the recent past. Between 2002 and 2010, the team won the American League Central six times in nine years, with a losing record only once (and that year, 2007, they were 79-83, which isn't that bad). They achieved this success despite being a small-market team with a payroll that ranked in the top half of the league only twice during that nine-year span.

In the four seasons since then, they've lost 99, 96, 96, and 92 games. The latter record, which landed the Twins in last in the division for the third time in four years, cost manager Ron Gardenhire his job. The Twins enter 2015 with Paul Molitor, St. Paul native and Hall of Famer, at the helm. He's never managed before, but he was the Twins' minor league baserunning and and infield coordinator in 2003 and 2005-2013 (he was Seattle's hitting coach in 2004) and was a coach for the major league team last year.

What's gone wrong? Here's a chart showing the team's rank in OPS+ (that's on base percentage plus slugging, adjusted for home park) and ERA+ (similarly adjusted earned run average) over the past thirteen years. Keep in mind that there were 14 teams in the American League until 2013, when the Astros switched leagues. In the Twins' last pennant season, 2010, represented by the horizontal line below, they were second in OPS+ and sixth in ERA+. They haven't come close to those levels since: 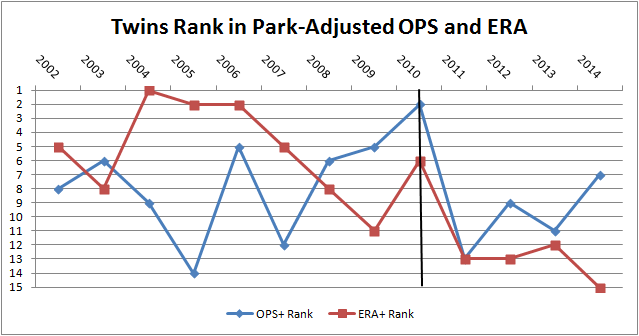 The rankings have bounced around, but what stands out is the collapse of the Twins' pitching beginning in 2011. They've finished second to last, second to last, fourth to last, and last in park-adjusted ERA since their last playoff appearance. The offense hasn't been great, but the problem's been an inability to prevent runs, not to score them.

So what's gone wrong with run prevention? Well, you know how fans and commentators are upset about risking strikeout rates? Say what you will about the team, the Twins pitchers have stayed clear of that controversy. Here's the team's strikeout rate (percentage of batters struck out) for its starters compared to league averages: 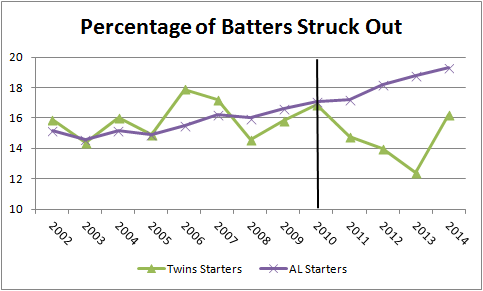 Again, the solid line corresponds to the Twins' last pennant. As you can see, after hovering around league averages, the Twins' starters' strikeout rates have plummeted. They improved some last year--welcome the the Twin Cities, Phil Hughes!--but they're still way below average.

How about the relievers? Same thing: 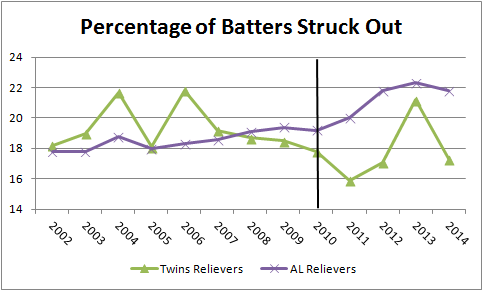 This, I think, explains a lot of why the Twins have run into trouble. Their pitchers don't miss bats. In the modern game, that's important. For the 30 major league teams last year, the correlation coefficient between strikeout rate and park-adjusted ERA is 0.60, which means that strikeouts are a significant component of run prevention. The more batters you strike out, the fewer runs you allow. The Twins aren't striking out enough batters to have an effective pitching staff.

Gardenhire's pitching coach, Rick Anderson, wanted Twins hurlers to "pitch to contact and trust your defense, throw strikes and minimize walks to pitch deep into games." Pitching to contact means trying to induce batted balls rather than strikeouts. That's at odds with the trend of rising strikeouts, but I don't think you can assign all the blame on Anderson. As the charts above illustrate, Twins pitchers apparently didn't listen to him much during the Twins' winning years under Gardenhire; the team's strikeout rates weren't out of line with league averages. The Twins' collapse in the standings has corresponded to a collapse in team strikeout rates. That's not a product of just what's going on at the major league level, it's a reflection of an organizational philosophy that has guided both drafting and player development. Twins pitchers don't strike guys out because, well, that's not what they do. The problem is, it simply isn't the way you win ballgames.

Now, it's not entirely fair to blame Liriano's problems with the Twins, nor his success with Pittsburgh, on the Twins' pitching to contact philosophy. It's true that he had his worst year, from a strikeout perspective, in 2011, after he got Gardenhire and Anderson's pitch-to-contact lecture, but his 24.9% strikeout rate with the Pirates in 2013-14, when he's been good, isn't that much different from his 24.1% strikeout rate with the Twins and White Sox in 2012, when he stunk. As I've written, his turnaround in Pittsburgh is largely due to an overhaul of his pitch selection, junking his fastball in favor of a sinker that generates lots of ground balls. Those grounders get gobbled up by Pittsburgh's infielders, who have aggressively employed shifts in order to position themselves where the ball's likely to be hit, as I wrote in 2013. As the article to which I linked pointed out:


Shifts are only as effective as the number of groundballs hit into them. The second prong of the Pirates' comprehensive run prevention strategy was tied to increasing their pitchers' groundball rates. Defensive change began on the mound.

So that's how pitching to contact can work: Get the pitchers to generate grounders, assemble a strong defense, and shift the infielders a lot. It's worked for Pittsburgh. How about Minnesota?

If anything, the Twins have gone the other way. Twins pitchers yielded ground balls on 42% of batted balls last year, 12th in the 15-team American League. They were eighth in 2013, 5th in 2012, and eighth in 2011, so they've gotten worse. Not only don't they have pitchers who generate strikeouts, they don't have pitchers who generate grounders. Again, that's an organizational thing, not just a major league level thing.

How about employing defensive shifts? The Twins shifted 85 times in 2013, second fewest in the league. They increased to 478 shifts in 2014, but that moved them up to only 12th in the league. The average American League team shifted 590 times. So they haven't employed shifts, which, as I pointed out, decrease opponents' batting averages on ground balls and soft liners by 30 points, as much as other teams.

As for defense, I looked at the team's defensive efficiency ratio, or DER. DER is a calculation of the percentage of balls in play that get turned into outs. It's useful because it looks that the defensive performance of the entire team. During the Twins' successful run from 2002 to 2010, they ranked eighth or better in the American League every season except 2009. In other words, they were pretty consistently at or, more often, above average. Since then, they've been 13th in 2011, 13th in 2012, 12th in 2013, and 15th in 2014.

This isn't a matter of a manager or a pitching coach. The Twins have been building the wrong kind of team. They've botched drafting, player development, and/or roster construction, resulting in a team that's not positioned for success. General manager Terry Ryan, who held the position from 1994 until after the 2007 season, and again beginning in November 2011, and Bill Smith, who was the team's GM in the interim four years, bear the blame for creating a roster of pitchers who can't miss bats and fielders who can't catch balls. They appear to have been way late to the game of using advanced metrics to position Twins fielders in order to increase outs. It's true that the Twins have a highly-regarded farm system--ESPN's Keith Law ranks them second in baseball--but their two top prospects played only 31 games between them in injury-riddled 2014 seasons. They've been bad for four years because the manager's been given a team that has the wrong type of players for contemporary baseball.

But by all means, blame Gardy. Gotta be his fault, right?
Posted by Rob Mains at 9:14 AM 1 comment:

A brilliant comparison of the Super Bowl and the World Series by Grant Brisbee.
Posted by Rob Mains at 2:35 PM No comments: