The Very Model of a Modern Major League Bullpen

Through four games, the Pirates have used the following pitchers in relief:

Do you notice anything? Let me show it a different way. Here's a list, by game, of Pirates relievers used:


Here's my point: Jared Hughes is the only Pirates reliever to have pitched more than inning so far this season. There have been 16 relief appearances, spread among seven pitchers, and in 87.5%, the pitcher's stayed in the game an inning or less.

This is in keeping with recent trends for the Pirates: 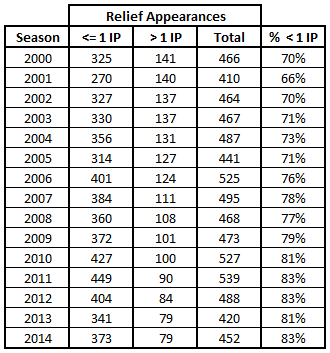 The percentage of relief appearances of one inning or less has been steadily increasing throughout the century. This isn't just a Pirates thing, it's a major league thing. Here's the same table for the entire National League: 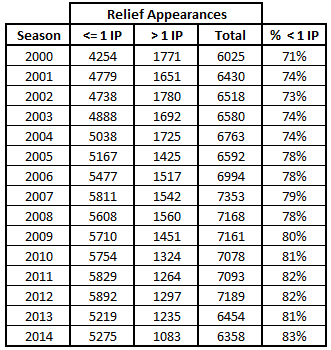 We live in a baseball world in which there are roughly five relief appearances of an inning or less for every one that's over an inning. By contrast, for the 1979 Pirates (the last time the team won the World Series), only 51% of the team's 326 relief appearances were one inning or less. In fact, in that year, Pirates relievers earned saves in 26 games in which they pitched more than an inning. (17 by Kent Tekulve, five by Grant Jackson, four by Enrique Romo). Over the past ten years, there have been only seventeen such games for the Pirates: one in 2004, five in 2005, three in 2006, none in 2007-2010, three in 2011, two in 2012, three in 2013, none since. The last Pirate reliever to record a save pitching more than one inning was Ryan Reid, on June 28, 2013, when he pitched the last three innings of a 10-3 blowout victory over Milwaukee. (A pitcher who pitches the last three innings of a winning game gets a save, regardless of the score.) The other two long saves that season were thrown by Tony Watson, who pitched the last two innings of a 5-3 win over the Reds and a 6-4 victory against the Phillies.

All these relievers pitching short stints must be caused by starters not lasting long into games, right? It turns out that's not the case: 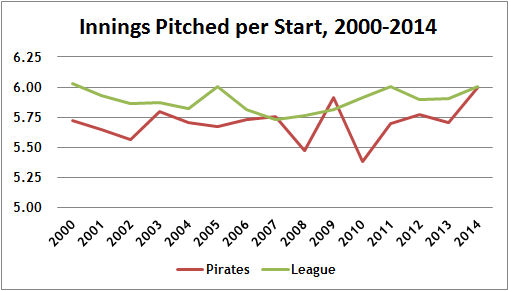 Starters are lasting longer than they did a decade ago. So the growing number of short relief appearances isn't because of a need to fill innings that starters aren't pitching. Rather, it's a tactical choice by teams: deploying a number of short-inning relievers who throw gas for a few pitches (every Pirates reliever's averaging over 90 mph on his fastball this year other than Melancon, who mostly throws changeups), then give way to somebody else who throws gas for a few pitches.

Again, this isn't a Pirates thing, a major league thing. But it contributes to two contemporary baseball scourges: Strikeouts (last year, National League relievers got strikeouts on 22.6% of opponents' plate appearances, compared to 19.5% of starters) and pace of play (for all those pitching changes).
Posted by Rob Mains at 4:31 PM