In about a month, I'll restart my weekly Trailing 30 report, which lists league leaders over the prior 30 days. There's no sense in doing it until then, though. If you want to know who's leading the league over the past few weeks, just look up the current standings. Once we get into May, seeing who's hot (and not) of late becomes interesting. At this point, it's just current events.

This chart shows the Pirates' winning percentage against Milwaukee, at home and on the road, over the past 15 years. The pattern is pretty clear. 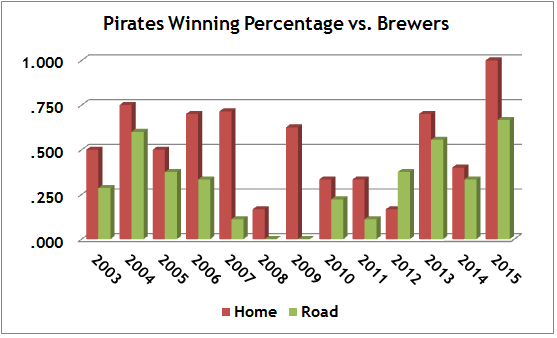 The Brewers used to absolutely own the Pirates, particularly at Miller Park. From 2006 to 2011, the Pirates went 6-48 in Milwaukee--a .111 winning percentage. After Pittsburgh's three-game sweep at home over the weekend, they're 3-0 at home, 2-1 on the road against a Milwaukee team that, to put it nicely, didn't look particularly sharp.

As I pointed out last Thursday, Brewers right fielder Ryan Braun had no extra-base hits entering the series against the Pirates. He exits the series the same: eleven games played, 38 at bats, nine hits, all singles. That's not much of a start for a player considered to be the team's biggest star and, at $13 million, its highest-paid player. This is Braun's ninth year in the majors, and this is only the second time he's gone over ten games straight in a season without an extra-base hit. That's not good. However, the one other time it occurred was in 2011, when Braun had a 12-game, 7-for-44 (.159) streak to start May. That was also the year he was the National League's Most Valuable Player, so it's not like he can't overcome his slow start. On the other hand, he wasn't 31, coming off two disappointing seasons, back in 2011.

This raises a question as to whether Braun is, in fact, the Brewers' biggest star. I'd make a case for center fielder Carlos Gomez or catcher Jonathan Lucroy. Gomez is on the disabled list with a strained hamstring, and Lucroy's started the year batting .132, which, combined with Braun's light hitting, helps explain Milwaukee's 2-10 start, the worst record in the majors.

But apparently the Pirates still view Braun as the team's star. In Saturday night's game, Brewers reliever Tyler Thornburg hit Pirates center fielder Andrew McCutchen with a high and inside pitch in the bottom of the seventh. I cannot fathom any reason for Thornburg to have hit McCutchen intentionally. The Brewers were losing, 6-1 at the time. There were two outs, nobody on. One of the stupid reasons that pitchers throw at batters is the prior batter hitting a home run. That wasn't the case; right fielder Gregory Polanco preceded McCutchen by grounding to second. Another stupid reason pitchers throw at batters is if the batter's having a big night; McCutchen had walked in the first, fouled out in the third, and walked in the fifth. So, as I said, Thornburg didn't have any justification for hitting McCutchen. Here's a plot of his pitches from Saturday night. 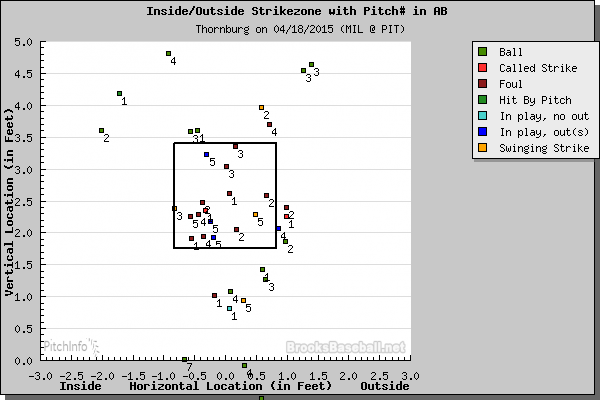 The point is, McCutchen is, unquestionably, the Pirates' biggest star. The code of baseball says that if you hit my star, I'm going to hit yours. McCutchen was hit in the bottom of the seventh inning. The Brewers went down 1-2-3 in the top of the eighth, with lesser lights (15 total plate appearances among them this season entering the inning) Martin Maldonado, Jason Rogers, and Luis Jimenez retired without incident. In the top of the ninth, Braun led up, and Pirates reliever Arquimedes Caminero promptly nailed him with a 98.6 mph fastball. Pirates fans cheered, the umpires warned both benches, and, a single and a run scored later, the Pirates had a 6-2 victory.

I'm sorry, but I really find Caminero's action objectionable, for two reasons. First, this eye-for-an-eye macho stuff serves no purpose I can see. Yes, I get it, McCutchen shouldn't have gotten hit. And if there were any reason to believe that Thornburg had done it on purpose, I could see the logic behind retaliation. But that really doesn't seem to be the case--Thornburg just threw too far inside, and McCutchen was unable to get away from the pitch, unlike Harrison, who was able to avoid an even closer pitch. Why is it necessary to retaliate for an accident?

Second, if you're going to retaliate, why do you need to do it with a 99 mph fastball? I don't refer to a hit batter as "getting plunked," because plunked conjures up an image of something soft and gentle, like getting hit by a pine cone falling from a tree. A baseball's hard to begin with, and throwing one nearly 100 miles per hour at somebody would be called assault, not plunk, away from a baseball diamond.

You know what this whole thing reminded me of? Last summer, when Diamondbacks reliever Randall Delgado threw a 96 mph into McCutchen's back, ostensibly in retaliation for Arizona's star first baseman Paul Goldschmidt getting hit by a pitch the prior day. McCutchen was hurt, missing several games, and a number of commentators called for Delgado to be suspended. What's the difference here, except that Braun didn't suffer an injury? Same casus belli, same action by the pitcher, same type of pitch thrown. I could do without all of it.

I suppose, though, that Braun can take solace in, apparently, still being the Brewers' big star despite his .237 slugging percentage.
Posted by Rob Mains at 6:35 PM