What's Broken with the Pirates?

The Pirates started well this year, going 15-9 in April, the fourth-best winning percentage (after the Cubs, Nationals, and Mets) in the National League. They slipped in May, going 14-13, and they're only 1-4 in June. Since winning five straight on May 23-27, they've won only twice in nine games. They're still in second in the Central division, but they trail the Cubs by 9.5 games and are only half a game ahead of the Cardinals.

And it doesn't get any easier in the near term. Tonight the team hosts the Mets for three games. Then they have to fly to Denver for a makeup game against the Rockies on Thursday, then fly back home for a weekend series against the Cardinals, After an off day, they open a six-game road trip with three games in New York and three in Chicago. The last of those games against the Cubs is the ESPN Sunday Night game, so it'll be a last flight back to Pittsburgh to start a four game season against the Giants the next day, followed by four against the Dodgers, then a cross-country flight to close out the month with two games in Seattle.

That's 23 games in 24 games, all but one against teams with winning records (and that one, against the Rockies, features the most idiosyncratic park in the league and is sandwiched between two long flights). And they're banged up; catcher Francisco Cervelli and third baseman David Freese haven't played since being hit by pitches in Thursday's game in Miami.

So what's been the problem?

Let's look at a few full-year statistics. The Pirates are 30-26. After 56 games last year, they were 31-25, so the overall results have been similar. I'm going to compare the 2016 Pirates to the 2015 Pirates, using full-year 2015 figures vs. year-to-date 2016 numbers. And instead of listing just the raw statistics, I'm also going to include where the team ranks in the 15-team National League. 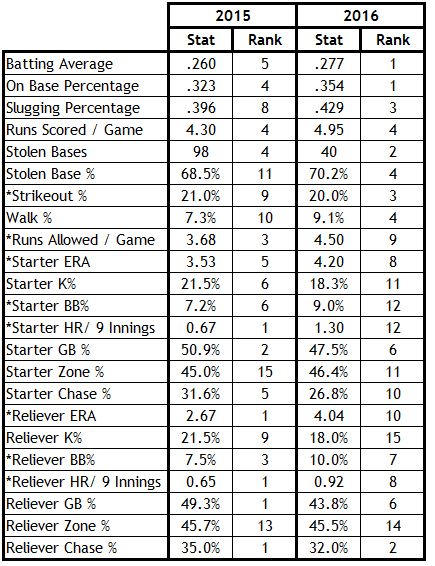 (an asterisk indicates that the rank lists how low the team is rather than how high. For example, the 20% strikeout rate on offense is the third lowest in the league, and the relievers' 4.04 ERA is the tenth lowest.)

A few things jump out.
It seems reasonable to expect more from the offense, especially as Cervelli and Freese return to the lineup and others shake off nagging injuries. The pitching, though, worries me. It's as if somebody sent out a memo to the other teams in the league over the winter with two words: STOP SWINGING. If the Pirates pitchers can't induce weak contact on outside-the-zone pitches as they have in recent years, the hitters, as good as they are, may struggle to consistently outscore opponents.