Teams that have won three World Series within five years:


So where does San Francisco rate among those dynastic teams?

Well, let's pare down that list first. The wartime Cardinals don't really count, given that many baseball players were in the service, so the talent pool was idiosyncratic. And the Giants...well, let's look at the Giants.

I'm going to compare the Giants to a couple teams of relatively recent vintage that didn't make the list and generally aren't thought of as dynasties: the 2003-07 Boston Red Sox (from Aaron Boone's walkoff in the 2003 ALCS to the 2007 sweep of the Rockies) and the 1984-88 New York Mets (Davey Johnson, manager). Here's a summary: 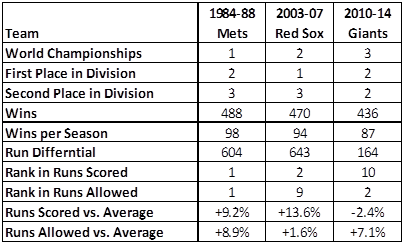 That kind of puts the Giants into perspective. Yes, they're only the second National League team to win three World Series in five years, and that's quite an accomplishment. But dynasties aren't just a function of the postseason. The Giants won, on average, seven fewer games per year than the non-dynasty Red Sox and nine fewer than the non-dynasty Mets. Their run differential (runs scored vs. runs allowed) was nowhere near as good as the Mets and Red Sox. The Mets and Red Sox scored runs in droves, while the Giants were below the National League average. (Technical note: I excluded the Astros in all the Giants' years, since they migrated out of the National League after 2012.) While the Giants were good at pitching and defense, ranking second to the Braves in runs allowed over the past five years, they didn't dominate the league the way the Mets did. And when you consider that Boston's Fenway Park boosted offense by about 5% in 2003-07 while San Francisco's AT&T Park suppressed it by about the same amount 2010-2014, the Giants' advantage in runs allowed narrows considerably.

And it's also worth noting that the Wild Card didn't exist until 1995 and the second wild card until 2012. The 2014 San Francisco Giants were the National League's second wild card, so would not have made the postseason during the Mets' or Red Sox' eras. By contrast, the 1984, 1985, and 1987 Mets, none of which made the postseason, would have won the Eastern Division under the current three-division configuration (they finished behind the Cubs in 1984 and Cardinals in 1985 and 1987). Any one of those teams, victors of 90, 98, and 92 games, respectively, might have added to the Metropolitans' postseason success.

This takes nothing away from the Giants' success this year, and in 2012, and in 2010. Certainly, they earned each of those championships. But let's hold off on calling them one of the greatest teams of all time, OK?