I had another article posted at FanGraphs today. Rather than reproduce it in full, here's the link. It's a little more stats/jargon/numbers-heavy than what I like to do here, but I encourage you to click the link anyway. The gist of it is this: As I pointed out in my post about Dodgers fans who leave games early, the idea of modern bullpens, with specialists in the seventh, eighth, and ninth innings, is to make leads after six innings insurmountable. We saw that with the Royals in the postseason, as their "HDH" bullpen (Kelvin Herrera in the seventh, Wade Davis in the eighth, Greg Holland in the ninth) turned games into six-inning affairs. In fact, as I presented in the post, the Royals won 94.2% of the games that they led after six innings, and the team leading 93.8% of Dodger games after six innings went on the win. Granted, those two teams are outliers. (The Dodgers were No. 1 in the majors in the measure of games won by the team leading after six, which I dubbed the Foregone Conclusion Index.) But are they part of a trend? Are 21st century bullpens making it impossible for teams to come from late-inning deficits to win?

To answer that, I looked at the percentage of games in which the team leading after six innings went on the win in each of the past 50 years. Here's a graph of the results: 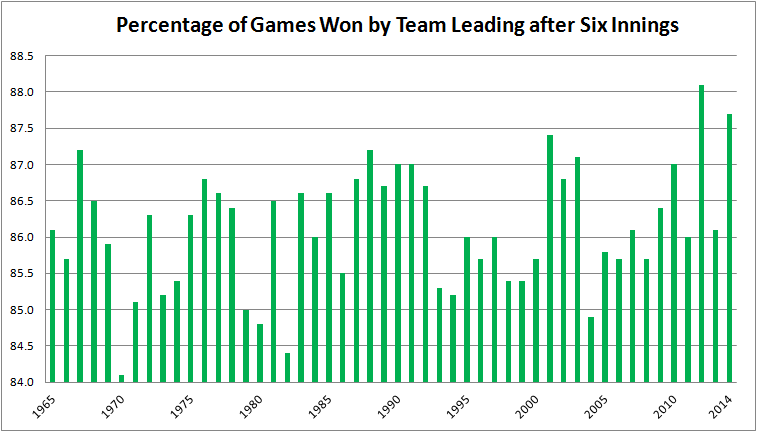 That might look like the percentage of games won by teams leading after six innings--or, put another way, the difficulty in coming back from a deficit after six innings--is rising, but there really isn't much of a discernible relationship. Yes, the two years in which leads were the toughest to overcome were 2014 and 2012. But 2011 and 2013 were both below the long-term average. So we really can't say that the modern bullpen has killed come-from-behind rallies.

The interesting question is: Why not? After the constant refinement of bullpens, from 22.7% of starters completing their games in 1965 to 2.5% in 2014, from the typical reliever pitching more than an inning to single-inning (or fewer) specialists, from the bullpen being a demotion for old starters to a starting point for young flamethrowers, wouldn't you think that it'd be harder to come back in the late innings? I can think of only three reasons why that wouldn't be the case:
The 50-year average is that teams trailing after six innings come back in just under 14% of games, or a little less than one in seven games. So far, the parade of hard-throwing one-inning relief specialists hasn't budged that.